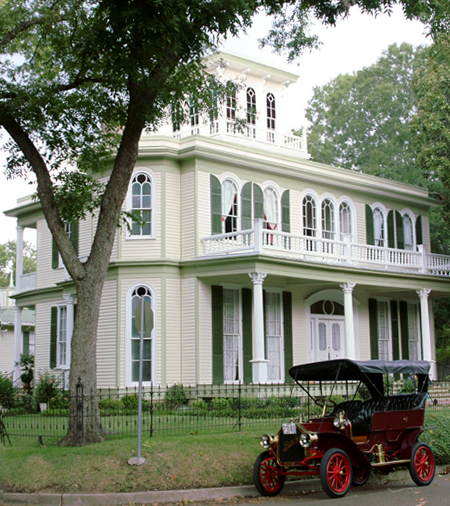 The House of the Seasons is a historical home in Jefferson, Texas. It is an exclusive destination offering bed and breakfast accommodations with private dining, and is an ideal location for weddings, special events and tours.

Construction of a Victorian garden on the north lot of the property at House of the Seasons includes native plants, a pergola and gazebo, birdbaths and more. A crushed granite walkway allows guests to explore the landscape.

Architecture featured in the garden has been designed to reflect the 1872 design of the house.
[ read more ]

The House of the Seasons was built in 1872 during the glory days of Jefferson, the largest inland port in Texas at that time. Colonel Benjamin H. Epperson who built the house was a prominent lawyer, political leader, entrepreneur, and confidante of Sam Houston.

The house is a fine example of the transition period between the Greek Revival and Victorian styles of architecture. The most unique features of the house are the cupola and the murals. In the cupola, under the picture, each wall contains a different colored stained glass that creates the illusion of the seasons of the year. 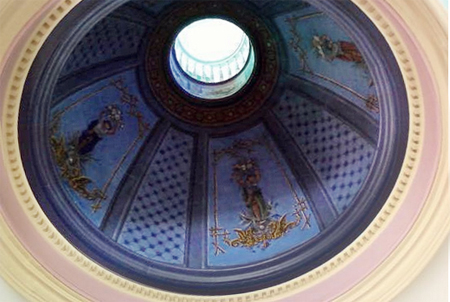 The most interesting interior feature is the dome containing beautiful murals. It may be viewed from the first floor through the well-like opening. The House is decorated to reflect the interior design fashion of the 1870s. Many pieces of furniture are original to the house, having been purchased from Miss Jeannie Epperson, Ben’s daughter, in 1974.

Acquisitions
The House of the Seasons continues historic preservation efforts through acquisitions. The collection features period furniture and fine art. Recent acquisitions include paintings that were original to the home.
[ read more ]

The house was purchased by Richard H. Collins in 1973 and restored between 1974 and 1976. The House has a historical designation and is now owned by the Calvert K. Collins Family Foundation. Calvert K. Collins, Mr. Collins mother, was the first woman to serve on the Dallas City Council.

Jefferson was a city with the nickname “Riverport to the Southwest”. The first steam-wheeler arrived in Jefferson in 1844 when it was the only dependable port in North Texas. After the Civil War, it became a safe-haven for people from the old South, who sought a new life. Texas was full of cotton, land, wool, pelts, and wheeler-dealers. Jefferson’s prosperity declined due to advances in technology, the railroad and dynamite. The shipping industry collapsed when the Army Corps of Engineers blew up a natural log-jam north of Shreveport with a new explosive called dynamite. The log-jam served as a natural dam that backed water up to Jefferson making its port navigable. The railroad allowed producers to sell their goods to other markets without having to leave their home town. This small town has survived a century and a half of hardships, economic struggle, an oil boom, and World Wars, and remains prosperous today. Jefferson is a place that features attractive old Southern homes and small antique boutiques. It is the perfect place for a quiet, romantic, and relaxing weekend get-a-way with fabulous food and people.